That wasn’t the planned, but the first night on a ferry I realised that the short trip to France will be exactly following the beaches where Allies troops landed in 1944. The exact date was 6th July, so was really close to 69th anniversary. Riding along the coast and seeing all museums, memorials, cemeteries makes you think how lucky you’re to be there, and how unlucky was those boys storming Normandy beaches, and how much you owing them.

Ok the trip. The timing was just perfect, as day before weather was a disaster (strong wind and rain), and last 5km before arriving back home started pissing again. Nevertheless nice sunny weather, temperature was around 15C. In fact this year is one of the coldest in last 100 years. I slept with all my clothes, wrapped completely in sleeping bag. I bet in the night was something like 3-4C (is nearly June for god sake what is going on?!).

The trip was a test as well. The first time I went with my Extrawheel trailer and new set of panniers Crosso. Quite overkill for two nights trip, but as I said it was a test, and the advantage was spare space for French cheese, and other good stuff ;-). The other thing I used first time was Karrimor X-lite inflatable sleeping mat. Here you can find a review. Anyway in my opinion, all three things are reasonably priced and doing the job perfectly. It’s hard to say after two day trip anything durability, but the first impression is positive. I must say that touring with trailer, is slightly different experience than ordinary panniers on a rack. At first of all clearance between the ground and pannier is about 20cm, and using same principle “heavy things on the bottom” will give you more stable bicycle. The other major difference is weight put on the rear wheel. Basically if decent wheel is used for trailer (standard 700C wheel with 100mm spindle) and well pumped road tyre (up to 110psi) I would say is same resistance as standard panniers. On one hand trailer is heavier 5kg+wheel than standard setup, but on the other hand there’s less rolling resistance with trailer as tyre is less loaded. So is really in my opinion just a individual preference. I don’t like front panniers, and as I hardly going on off-road I don’t need them. The other benefit is bike choice as is just a matter of replacing existing skewer with extrawheel specific and you ready to roll. So even carbon frame racer can be used if that’s your weapon of choice. The trailer I bought with extra rack (you can see here witch attached bag). I didn’t use the rack, but even without bag, I used top of the rack as a handle which proven to be quite handy. 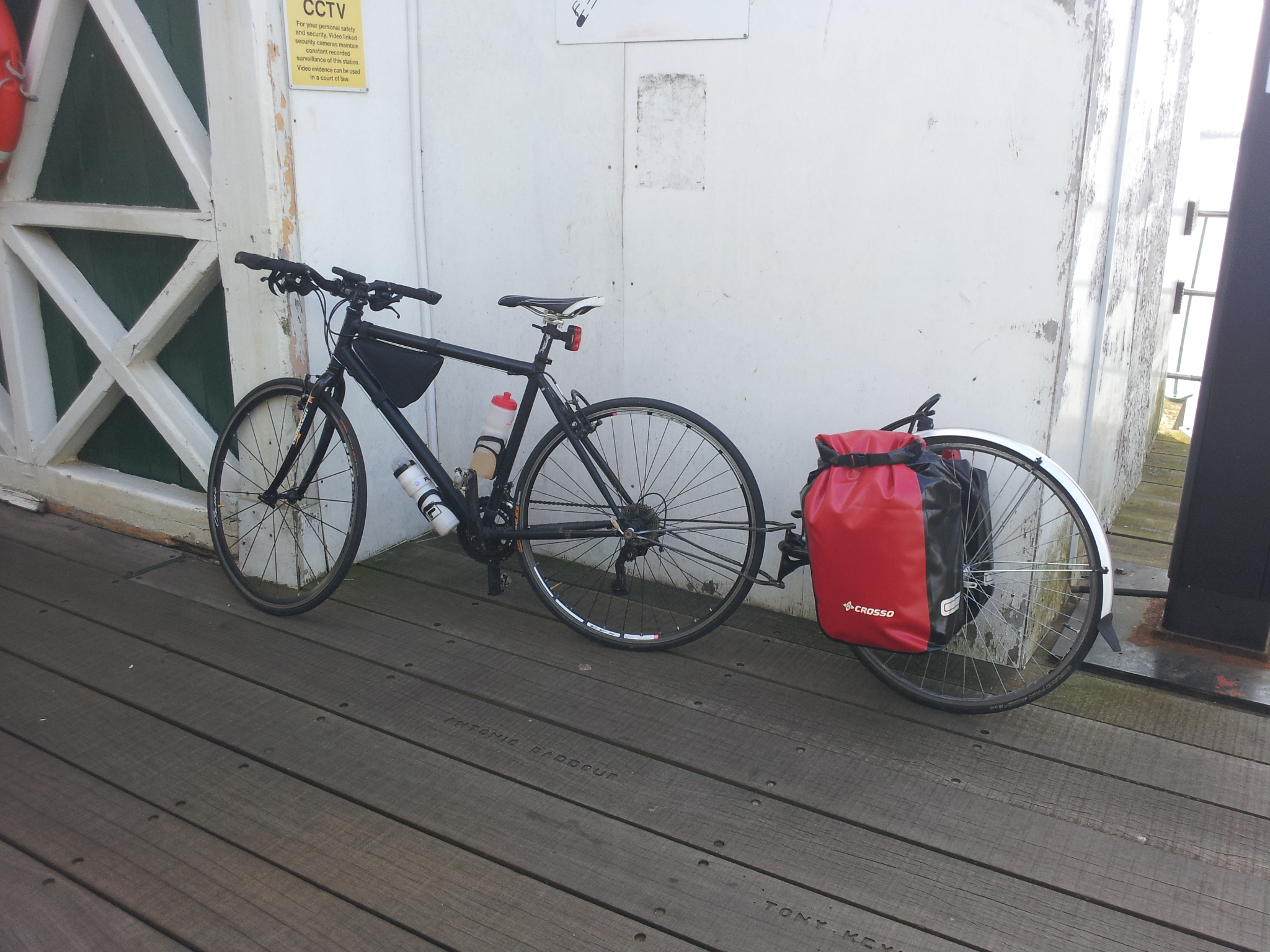 The best thing about Extrawheel in my case is when you arriving at the destination. Just disconnect the trailer and off you go with clean bicycle. So far I love it.

The other thing was Karrimor sleeping mat and it’s quite an improvement comparing to self inflatable mats I used before. In all aspects comfort, weight, and space as well. 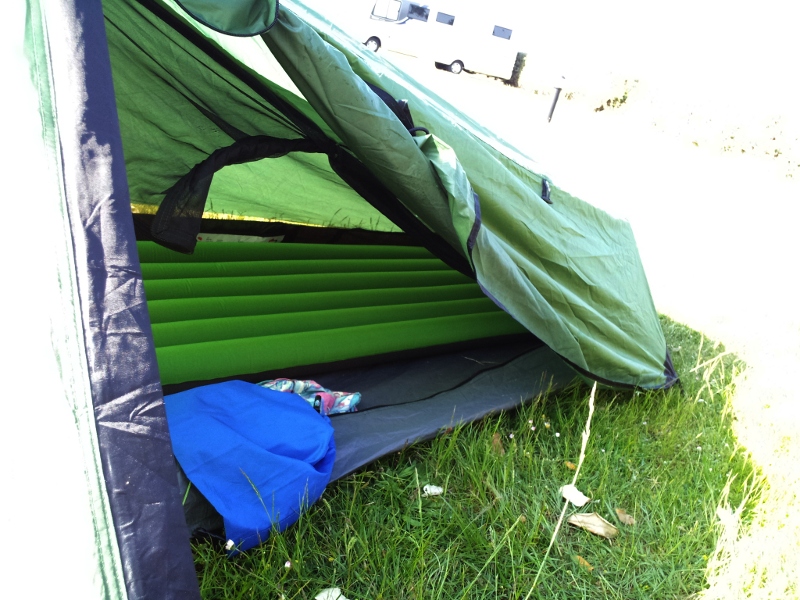 Each trip you’re learning something (and making mistakes). Next time I have to have sun cream, I forgot hay fever pills (big mistake in my case), I was too optimistic about temperature and ended up sleeping with all clothes, even cycling leg warmers (sic!) – a decent sleeping bag liner will do the job this time, but I also need better 3 season sleeping bag. Also I made some discoveries. Chamois cream can be used on lips ;-). I need a 11-34T sprocket on the back for pulling the trailer uphill. I didn’t have any punctures, but I need better tyres next time. I’m thinking about Gatorskin from Conti or Gator Hardshell. As I’m riding on tarmac probably I’ll buy something like 25-28mm.

#1 Now I’m mastering the route from my town (Blandford Forum) to Portsmouth ferry. I used two ferries this time: Hythe (route to Hythe Pier) and Gospot-Portsmouth (route to Southampton-Gosport) so I’ve minimised route on A35 and A27. The other benefit is time on the Hythe ferry you can use to have a snack, because basically you’ll have at least 20 minutes, and after 70km is just perfect place for first break. Then quick jump to Gosport and you know if you on the schedule or not.

Hint #2. When you boarding on the ferry, and you haven’t got cabin with a bed, get your sleeping bag and sleeping mat with you. also ear plugs will be quite useful ;-). Then you can put your mat anywhere on the floor and have (almost) normal night. Hint #2. Get your towel and shower gel. There’s no feeling like hot shower with over 100km in your legs. (if you’ll add a pint of lager afterwards you’re king).

Last week I’ve purchased new platform pedals for my commuter. Because of the price, I’ve chosen diamondback alloy platforms from wheelies. I’m always using the cheapest platforms for commuter, as I don’t want splash 50-60 quid on fancy pedals. Let’s be honest, if you’ll spend 60 quid on pedals how long they’ll last? 5 years? Ok let’s say 5 years. For half of the price, I have every two years, new pair of cheap platforms for ten quid. Anyway, the first thing I’ve noticed after unpacking box, was how tight the bearings are (but hey don’t be fussy, don’t expect 10 quid pedals be ready to rock out of the box). So, I pry the plastic cap and attempted to adjust bearings. Below you can find, what I found inside… 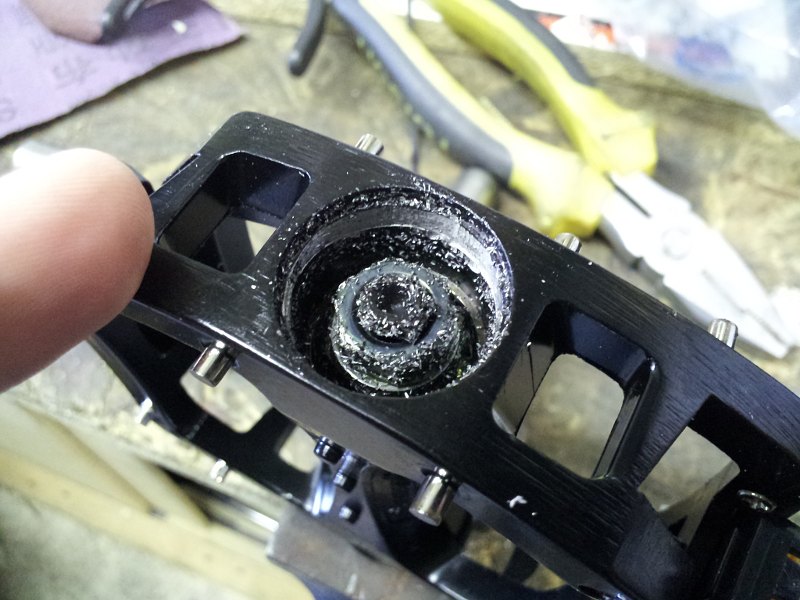 Inside was plenty of alloy fillings (probably left after machining pedal body for dust cap). Just wondering how crap is the procedure that they greasing bearings before boring the hole?! Same both pedals. No comment.
First thing I wanted to do, is just send them back, but that’ll take longer than cleaning, greasing and adjusting…