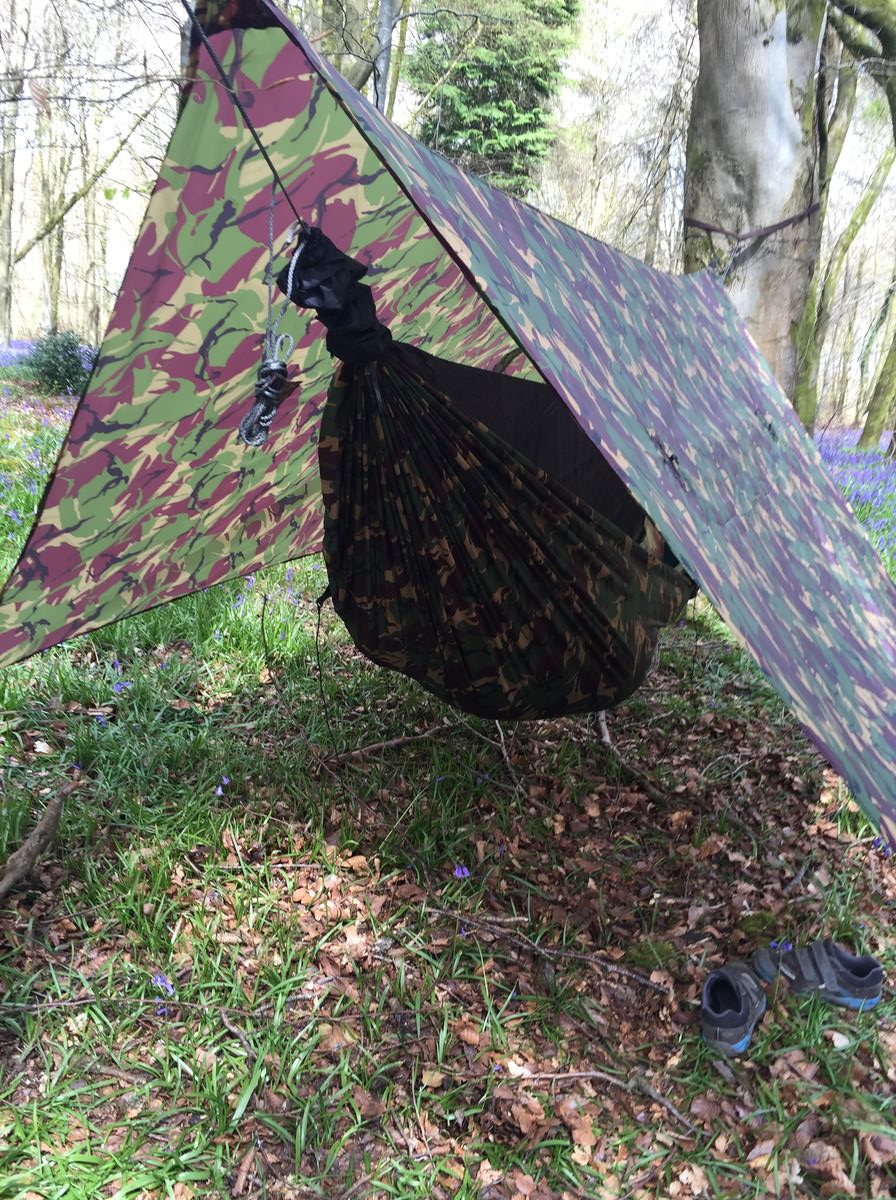 Yep. Why not. After watching couple of videos and diy tutorials, I bought bits and bobs and made one. Looks like after swapping to hammock camping, people never looked back and some of them become almost preachers. 😉 Anyway, I think that might be best idea for one/two nights micro-adventures. (even some primates figured that out)

Nothing been done in one weekend or something and the whole process took me couple of evenings (sometimes ripping off what I’ve done). For hammock sewing bonanza I used ripstop nylon (standard weight 65gsm), some nylon straps for tree hugers 20mm, amsteel line 7/64inch for suspension and some 2mm dyneema for ridgeline.

Normally gathered hammock is pretty straight forward piece of kit. Just a piece of fabric of your choice, rolled hem all sides (sometimes channel at the end) gathered both shorter ends and added suspension (might be polyester webbing, might be dyneema or Amsteel) with or without tree huggers (to protect bark on trees). However I made mine, slighty different way. Mine hammock is not rectangular piece of fabric but parallelogram. Initially that was piece of fabric 310x152cm which from I cut out two triangles about 50cm each side. 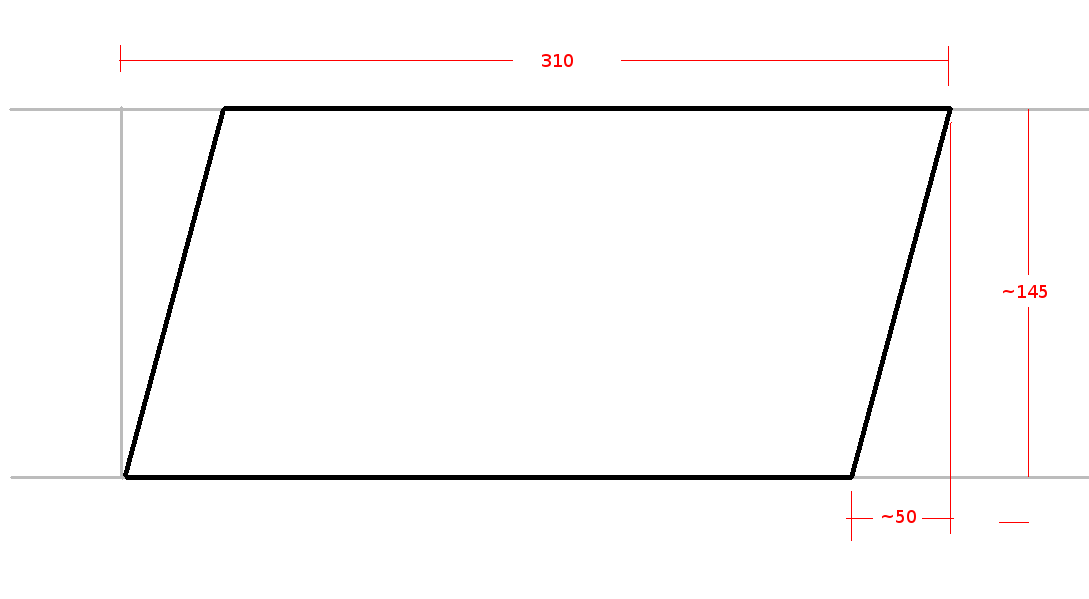 Hammockers knows that in order to lay flat, you need to position yourself diagonally. In standard hammock you can lay down four ways, in my is just two (or really one way, as zipper for bug net is only on one side)

The rest of the story is pretty much the same. I sawn rolled hem on longer sides and narrow channels on shorter. Next step was to feed a piece of standard 4mm dyneema line into channels. I made knots and left them with knots as attachment points for ridge line. Ridge line is made from 2mm dyneema rope, attached with larks head knots both end. It is used only to have same sag of hammock every time. This way, whatever the angle of suspension is, the hammock is hanging same way (keeping same shape, the only difference is tension on ridge line). Without ridge line you need to adjust angle on your suspension to make same sag every time, which might be a bit tricky.

For suspension I made whoppie slings, again nothing new for experienced hammockers, but is quite ingenious idea. Basically the Amsteel cord is hollow braid so you can feed the cord inside itself. This way when you pulling it braid closes on piece of rope inside and preventing slipping. Hard to explain so I’m strongly recommend watching video (or here) or pictures. Long story in short that’s probably one of the lightest way to hang the hammock without any hardware. BTW. There’s lot of different diy projects with Amsteel just to start with couple of them:

Finally the whoopie slings are attached to tree hugers with marlin spike knot and I’m using two pieces of fiberglass tent pole cut to approx 7cm as stoppers (they’re attached permanently to tree hugers with piece of cord). Obviously piece of stick can be used as stopper but I found easier untying knots when you pull out piece of sleek tube rather than wrestle with rough stick.

Finally after couple of tests I’ve added attachment points to sides of the hammock to keep the fabric off my face, and pieces of shock cord has been added to make the whole pitch looks neater.

Then I decided to add bug net but probably the hardest way. There was couple of options. Partial bug net – neat and light (only problem when is hot and you don’t want to be in sleeping bag), full bug net massive sack made from mesh, with shock cord on the bottom (the easiest way), full netting with zipper around creating kind of “lid” (most laborious and hard to make). I made mine slightly different. Instead of continuous zip around perimeter, I sewn zipper only on one side (actually slightly less than one whole side). This way if bug net is not needed I can unzip it, pull it on the side, attach by two toggles and enjoy star gazing. Again, bug net turned out as parallelogram shape. The ends of no-see-um netting fabric I left slightly longer, gathered it and attached shock cord to keep the netting a bit stretched (looks tidier). I didn’t sewn to the end of the hammock edge, leaving gap about 4cm so I can freely manipulate ridge line etc. The hole doesn’t bother me as normally there’s “snake skin” rolled on both end. (snake skin is basically two long pieces of tubes made of fabric to cover the whole hammock, it keeps everything tidy)

As Shug on his channel said “once you tried underquilt you’ll never go back to sleeping with mat in hammock”. I decided not to test this in practice, and went straight for underquilt.

Underquilt is essentially a quilt (half of sleeping bag) suspended (on elastic shock cords) underneath the hammock, so when you lying in the hammock you’re not compressing insulation, but is tight against hammock so you haven’t got any air flow underneath. In theory with underquilt plus quilt inside hammock you “floating” in the air inside sleeping bag. More theory here.

As hammock will be used mostly in summer/spring/early autumn I don’t need too much insulation. I picked up cheap envelope sleeping bag. Sleeping bag which ticked all boxes. After unzipping I had more/less square piece easy to work with. Fairly thick, but still summer/spring graded. Inside and outside nylon/polyester, as I didn’t want polycotton or anything like this. After whole procedure left enough insulation to make two pillows and zip which I used for bug net. £15 but almost no left overs. 😉

Basically couple of steps. I draw initial shape on the inside of unzipped sleeping bag and I sewed through all the layers once. This way I trapped insulation and fabric so I could start to work. Then I cut off all around the shape. next I added channels on all 4 sides, fed shock cord, shock cord lockers as suspension system so I can tighten the underquilt around hammock. Finally two s-binners has been added at both ends to attach it to hammock suspension. Unfortunately I haven’t got any pictures but there’s plenty photos you can find on Internet. 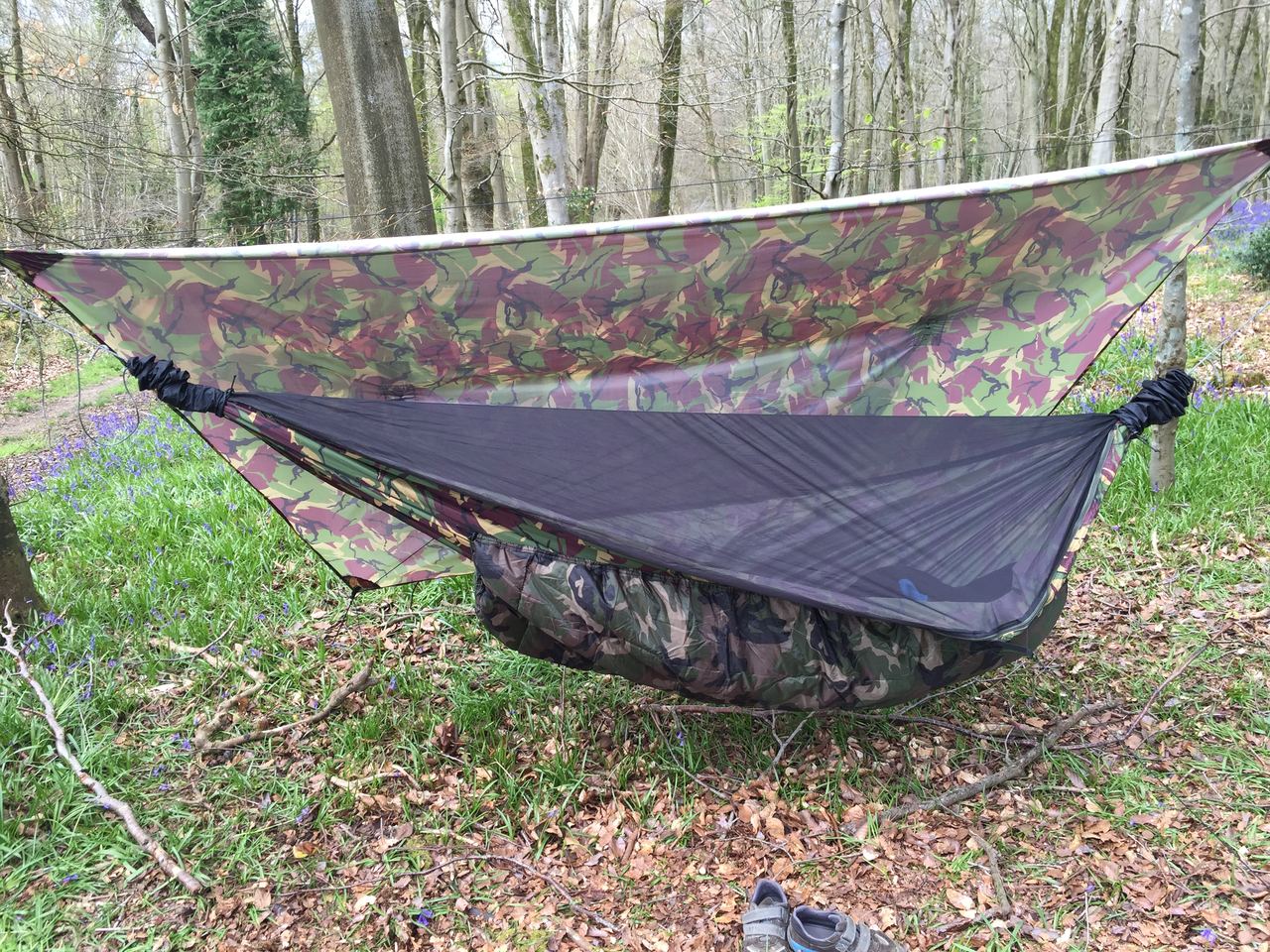 Finaly tarp. The simplest bit of kit but not necessarily easiest to make.

Not too much to talk about tarp. I decided to have 6 atachment (2 for ridgeline, 4 for stakes) plus 4 on the sides to create more space inside. Very similar to this one. Looks like easy job but I can tell you isn’t fun sewing ripstop nylon. In my case sewing one way – length wise was easy. So fairly easy job with ridge line and bottom hems. The vertical hems were a bit tricky. Again I’m crap explaining this stuff but Joe Brewer made excellent video how to make one, step by step. Ridge line is just a piece of 2mm dyneema. On one end I got loop and toggle to create loop around tree. Plus further down two loops with prusik knots and carabiners for attaching ends of the tarp. This way is easier to secure ridge line first between trees and then attach tarp an centre it above hammock. 4mm shock cords added to bottom attachment points and 3mm shock cords on the sides. Voilà!

For final test we had some lovely weather (cold though).