Latest creation of a tool to check/calibrate spoke tensiometer. It’s pretty simple tool as below:

A piece of square tubing with attached digital scale at one end and bracket on the other which allows to (precisely) tension spoke and calibrate tensiometer.

The “scale end” is pretty self explanatory. Just a digital scale attached to tubing. On one side the scale has got soft aluminium plate, with drilled 2.5mm holes, to keep spoke head (pretending to be hub flange).

On the other end of the bar is a bracket which allows to put a tension by turning the nut.

Why did I make it? I bought tensiometer some time ago. The tensiometer is not from the well known company, but a cheap copy (£17), which however IMHO is made better than original(!). It came with a table of tensions and instructions how to correlate reading with spoke dimensions, but I didn’t trust it whatsoever. So the calibration tool is a really cheap project, but effectively making even cheap tensiometer equal to fancy “blue one” ;-). The most expensive is the scale, which is around £15. Rest is just a square tubing (£4) and a couple of bolts to put it together.

There you go. Still, probably the most important, is to have as close to equal tension around the wheel as possible, but is nice to know where the limit is, as “tight” wheels are not going out of true that easy. Not mentioning, that to me the tension scale (reading the deflection from the tensiometer) looks logarithmic (I need to check it). Anyway, let’s simplify. That means, if let’s say, 40kg is 15 reading from tensiometer and 60kg is 20 doesn’t mean that 80kg will be 25 (20+5). 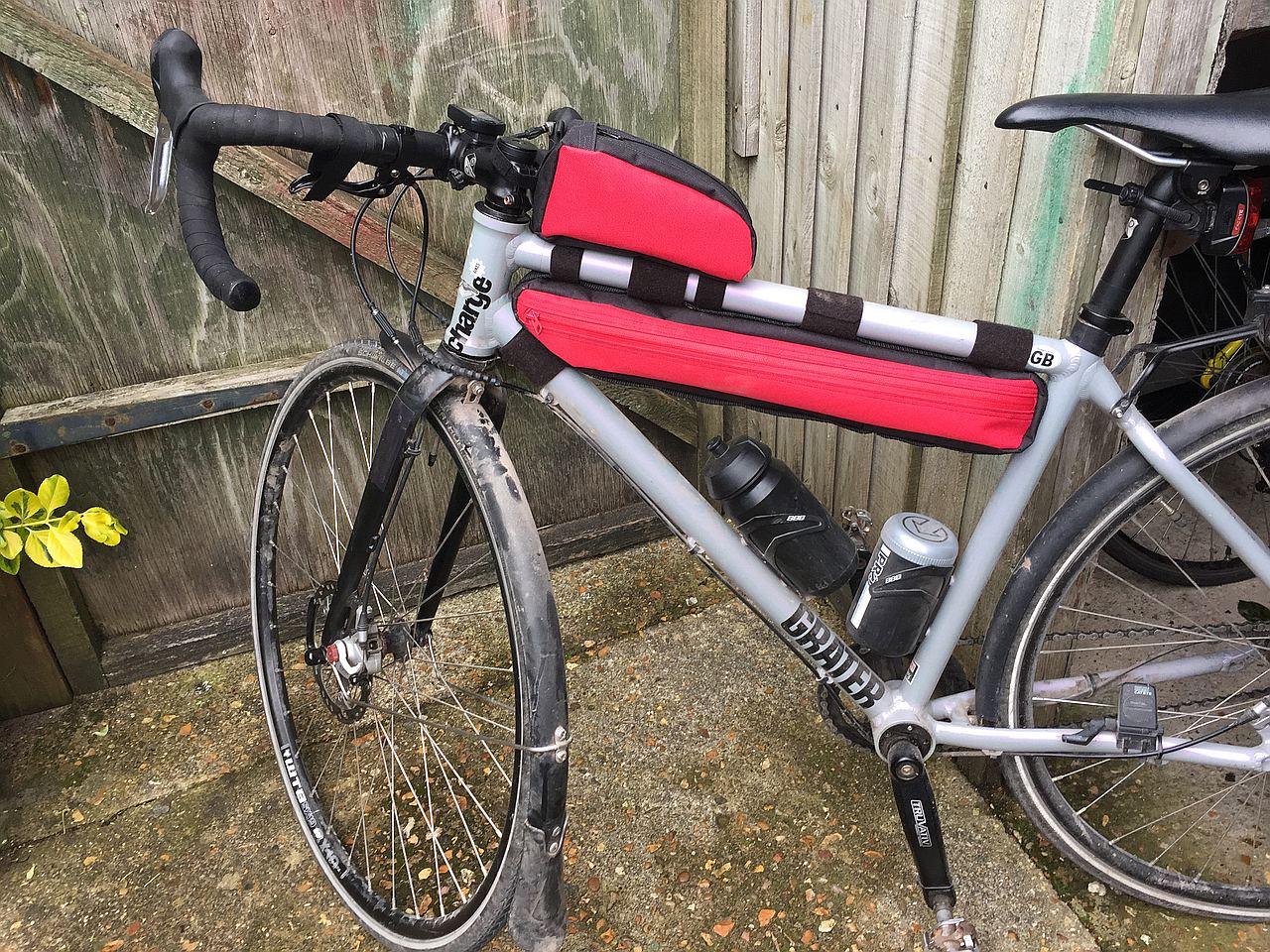 DIY bonanza continues, and again I recreated (almost) Alpkit bags. This time I made Mk2 of the frame bag I’ve got already. The bag is proven to be probably the most useful piece of kit, mostly for storing hardware like tent poles/pegs, pump, puncture kit, battery pack etc. The only change I’ve done this time is additional hole for cable on the side. Construction is simple not to say primitive. Two side panels on the left hole for cable
(corresponding with same hole in top tube bag) on the left (always dismounting on the left side) is zipper, and there’s no point to split the bag so it’s one large compartment. Polyester webbing around and stitched in places (Alpkit idea) to create attachment points for Velcro straps.
Top bag is a similar construction: two side panels, zipper in the middle, cable hole on the right. On front and bottom is piece of webbing sewn same way as on frame bag, to provide “loops” for velcro straps.
Both bags are made of Cordura type fabric which is quite stiff and thick, and probably better choice will be some kind of reinforced polyester or something. The problem with Cordura is when you sewing thick material like that it is real pain to make all tight corners nicely, but I wanted to make it on cheap from the stuff I already got. Anyway bags came out as expected, and despite the fact I’m not happy with quality of my stitching they should do the job. Below short story in pictures.